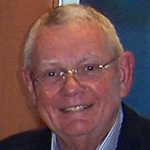 In the early 70s (before Orange was a diocese and before Orange had its own expression of Cursillo) Julie and I moved to Newport Beach from Los Angeles. We were both “cradle Catholics”, but somewhere along the way through college, law school, marriage, work and four children, our Catholic faith virtually disappeared. In Newport we reconnected with friends from
high school and college. They had a decidedly different way of celebrating. It wasn’t long before they began to talk to us about this retreat they had attended and how great it was. I declined the invitation to go on a Cursillo weekend for almost a year. I relented, finally, only because I was tired of my friend’s persistence. On Labor Day weekend in 1973 I was off to a boys camp in north San Diego County. At that time Cursillos were held in the Los Angeles Archdiocese at the seminary in San Fernando or in the San Diego diocese usually at a camp or school. It was a blistering hot weekend. Our chapel was a surplus army tent with old metal folding chairs. We slept in more surplus tents on bunks with the bathroom down the hill. I remember sitting in that chapel the opening night telling God the “If you are real, you better show me because I am never
doing this again…not even for a good friend”. To this day, I am not sure what happened. I met Jesus Christ that weekend. In fact Julie, who didn’t make her Cursillo until a month later, was sure I had been brain washed. Julie’s and my faith was reborn. We became active in the San Diego Cursillo working a number of weekends. We also became active in our parish Our Lady Queen of Angeles. Julie eventually became the Director of Religious Education and I started an evening bible study which continued to meet every Thursday evening from September to May for 25 years. Even though we have now retired to Palm Desert, I continue to teach and Julie
facilitates a women’s bible study at Sacred Heart, our desert parish. We owe our spiritual lives to the Cursillo Movement and the persistence of friends who knew better than we did about what we needed. Yes, God is real and now, 46 years later, I experience God’s love every day.

Orange County Cursillo | communications@occursillo.org | occursillo.org In our gospel today Mark 2:1-12, a group of men bring a paralyzed man to Jesus. They can’t get into the door of the house where Jesus is because of Read more…

Orange County Cursillo | communications@occursillo.org | occursillo.org   Old Testament scholars of the law were saying that when God comes he’s going to be mad and that’s bad news. He’s going to crack down on the law so Read more…

Orange County Cursillo | communications@occursillo.org | occursillo.org The early passages from Mark Chapter One are kind of like “a day in the life of Jesus”. They are an attempt by Mark to characterize how Jesus lived and ministered. There Read more…