Are you ready to move forward in your faith?
For those of you who have not made a Cursillo Weekend and are interested in finding out more about Cursillo, please contact us at:

How did Cursillo start?

A brief history of the Cursillo Movement.

Cursillo came out of the pain and horror of the Spanish Civil War which ended in 1939. Spain was a Catholic country, and in that war Catholics were fighting Catholics, and when the terrible killing ended, the country was nearly dead spiritually.

Then the Holy Spirit took charge, and a young Spanish Catholic lay group responded to a plea from Pope Pius XII to restore Christian values to their country. After prayer and discernment, these remarkable young people, decided to gather 100,000 young men and women to go on a pilgrimage to Santiago de Compostella (the burial place of St James the Apostle). It was an arduous trip and they encouraged each other by saying “Ultreya”, which means “Onward”.

The Cursillo was formed during that pilgrimage, and under the leadership of Eduardo Bonnin and Juan Hervas, Bishop of Majorca, the first Cursillo was held on the island of Majorca, Spain in 1944.

It was brought to the United States by two Spanish Military Exchange Pilots who were training with the US Air Force in Texas. The first US Cursillo was held in Waco, Texas on May 25, 1957.

It quickly spread throughout the United States, and the first English Cursillos were held in 1961. Our first Orange Diocese Cursillo was held at Blessed Sacrament parish in Westminster in May 1977 and since then some 10,000 people in our Diocese of Orange have made their weekend and become Cursillistas here. Worldwide, there are something like 6 million Cursillistas.

Fruits of the Cursillo Movement

Our Catholic Cursillo has been so successful in bringing people to Christ that it has found expression in other faiths: There is a Lutheran and a Methodist Cursillo, there is also a protestant Walk to Emmaus which is essentially identical. Also coming from Cursillo has been the Kairos movement, which is an interfaith Cursillo-type weekend for those in prison. Other “retreats” based on Cursillo are the Marriage Encounter, Engagement Encounter, and a retreat for those whose marriages are troubled, called Retrovaille (pronounced Retro-Vie).

What Cursillo will mean for you?

Many who have made their Cursillo retreat weekend have likened it to a personal encounter with Christ or being touched by the Holy Spirit.

Everyone experiences something different and is touched differently by the retreat weekend. The purpose of Cursillo is:

A three-day experience of living Christianity — a little course (in Spanish, “Cursillo”) — in Christian community. Daily Mass, communion and visits to the Blessed Sacrament are available.

It Starts on Thursday evening and ends Sunday evening. During those three days those attending live and work together listening to talks given by priests, deacons and lay persons and perticipate in small group discussions.

With an invitation to form a small Christian support group which is joined to a larger Christ-centered community in the Diocese of Orange and around the world.

The community spirit of the weekend is continued through reunions of small groups of Christians and through Ultreyas or the gathering of the larger community.

With a method to work together to bring other men and women to know and love Christ.

What happens on a Cursillo weekend?

Those who participate in a Cursillo weekend live and work together, listening to talks given by priests, deacons and lay persons, participating in small group discussions, daily Mass and visits to the Blessed Sacrament

What do I need to attend Cursillo?
What is Pre Cursillo?

The Pre-Cursillo phase of the Cursillo Movement involves the:
Promotion of the Cursillo Movement at the parish level by parish representatives & contacts.
Education and training of effective sponsorship.
Selection and preparation of candidates who will move on to the 3-day Cursillo weekend.
The Pre-Cursillo is sometimes rightly called recruitment in the sense the United States Marine Corps recruits: “looking for a few good people” who, after having made the 3-day Cursillo weekend, naturally will have influence on the environments in which they live and work; to evangelize those environments for Christ.

Palanca is prayer, sacrifice, alms-giving, works of mercy, and acts of love for God – for the sake of another.

The School of Leaders is the place where the work of the Cursillo movement is planned, shared, and carried out. It meets monthly, using a Leaders Group Reunion as the format in which this is done. It’s members come from the membership of Cursillistas in Orange County. School of Leaders is open to all Cursistas who have made a Cursillo weekend anywhere, anytime. So come join us and fulfill the mission to evangelize the world.

How do I put the Cursillo icon on my Android phone?

Step 1
Open Chrome on your Android phone. Visit the website for which you want to create a shortcut (in this case: https://www.occursillo.org/).

Step 2
Tap the “Menu” button on the bottom right of the screen and select “Add to homescreen” to create an icon for this page on your home screen. 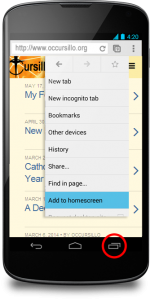 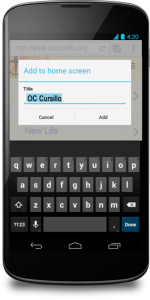 How do I put the Cursillo icon on my iPhone?

Step 1
Open Safari (yes it must be Safari) on your iPhone. Visit the website for which you want to create a shortcut (in this case: https://www.occursillo.org/).

Step 2
Tap the “Share” button on the bottom of the screen.

Select “Add to Home Screen” to create an icon for this page on your home screen.

Think of it like new wine (Jn 2:1-11). According to the head waiter, the old wine was good and the new wine is exceedingly good… let me explain…

Here are some of the problems faced by this growing community that are resolved or will soon be resolved by the new website:

There are many more benefits to the new site that have yet to be fully realized by the community and especially on the administrative side, which we’ll reveal and discover in due time.

Yes, all these things were possible to accomplish on the previous website, but only with increasing complexity as new technologies continue to develop.  This new website can grow with the community for quite some time.

Someday, probably sooner than expected, this website will become obsolete, and when that happens we won’t miss anything that we used to have because everything we had, we will still have; just magnified in a new way.  It will be like new wine, both reminiscent and effervescent,  tasting a little like the first and yet refreshed, making us marvel at the surpassing goodness of God.